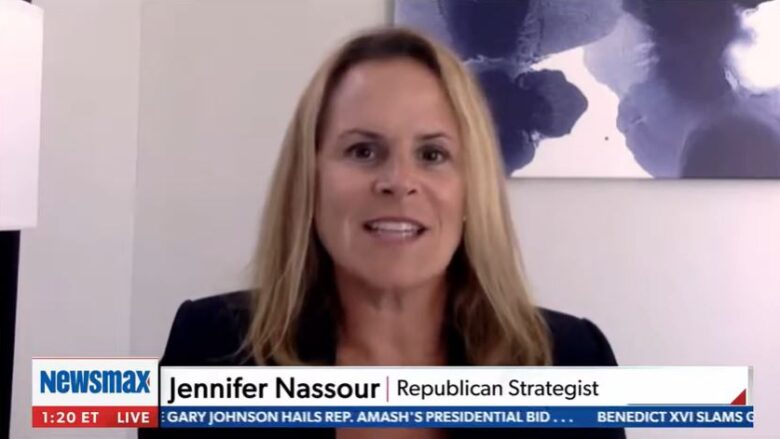 Jennifer Nassour is invested in the race for mayor in Boston.

Nassour, who served as the Massachusetts Republican Party’s chairman from 2009 to 2011, supports city councilor Andrea Campbell for mayor. Campbell was also endorsed by The Boston Globe on September 2.

Nassour, a socially liberal Republican, donated $1,000 to Campbell’s campaign for mayor on February 26 of this year, according to the Massachusetts Office of Campaign and Political Finance. Nassour also contributed $1,000 to the Better Boston Independent Expenditure Political Action Committee on June 14, 2021. It’s a PAC that supports Campbell’s run for mayor.

Nassour, who lives in the Back Bay neighborhood of Boston, spoke to NewBostonPost by telephone about her support on Sunday morning this week.

“Number one, we became friends awhile ago,” Nassour said, referring to Campbell. “We had met and I have a lot of respect for her background. She’s a very well educated woman, she grew up in the city of Boston and suffered hardships not too dissimilar to what I’ve had. My brother died at 26 years old of an accidental drug overdose, so her and I share a similar story. I’ve found that she’s always been open to hearing my opinions even though they may be a little different than hers. But at the end of the day as someone who is a lawyer, has had experiences, her door is always open to all sorts of different ideas.

“As Republicans in Boston, we can’t expect to get the perfect candidate ever. Instead of looking for the person who is 100 percent in the same lane as we are, it’s really important to find someone who will do the best for the city they can for the city overall. That’s on housing, and that is on education, the safety of our streets, making sure there are economic opportunities for everyone and I think she is the only candidate that will do that.”

Campbell supports the NARAL Pro-Choice Massachusetts city champion pledge. The pledge requires candidates to support the ROE Act (which eliminated parental consent for 16- and 17-year-olds seeking abortion and eliminated the guarantee of medical care to babies born alive following an attempted abortion), oppose voter ID, support insurance companies covering abortion, support implementing pro-LGBT sex education in public schools, and oppose pregnancy resource centers in their respective communities. Pregnancy resource centers inform women of the alternatives to abortion and the resources they’d need to give their child up for adoption or to raise their child; some clinics provide free ultrasound images and baby supplies, while others make referrals to places that provide them.

Campbell supports reducing the the city’s police budget. Back in August, she said she supports a $50 million cut to the Boston Police Department’s budget (12.5 percent) to help pay for some of her other policy ideas. She would reduce the funding by eliminating mandatory minimums from overtime contracts and by increasing the use of civilian flaggers on special details for construction projects to save money.

Campbell has also said she is open to raising taxes. She said she’d consider a sales tax on junk food, if elected.

Nassour emphasized that she does not see Campbell as the perfect candidate. Nassour also described in the interview her own outlook on social issues.

“My whole thing is you can do whatever you want as long as it doesn’t cost me money,” Nassour said. “I’m libertarian on what you can do with your body, and in your own home, and in your life.”

She also said that the social issues in the race for mayor of Boston aren’t the same as in a state or federal race. For example, she mentioned housing as an important issue int the city, and she said there can’t be a blanket approach toward building affordable housing across the city in areas that lack resources that working people need.

“You cannot tell people to go live in one end of the city when there is not a public elementary school and the jobs are not there,” Nassour said. “If we want to fix issues, we need people who will listen to people from different parts of the city. The social issues of the city are socioeconomic. They’re education, housing issues, cleaning up our streets so that when my kid is playing soccer on Boston Common, I’m not concerned that my kid is going to be stabbed with a needle. The social issues here are about families and as long as we’re aligned on that, we’re good.”

One candidate who has drawn support from some Republicans in the mayoral race is city councilor Annissa Essaibi George. Like Campbell, she is a liberal Democrat, but she supports hiring additional police officers in Boston. Republican city council candidate Donnie Palmer supports Essaibi George, for example.

Nassour explained why she is backing Campbell over Essaibi George.

“Andrea is much more well-rounded than Annissa,” Nassour said. “She’s a nice person, I don’t have anything against her, but I think she’s beholden more to special interests and if you weren’t with her from the beginning, she’s not going to keep the door open for you. I don’t think that’s the way to be mayor. If you’re going to be mayor, you have to be mayor for everybody whether they agree with you or not.”

Additionally, Nassour said that she sees city councilor Michelle Wu as too opportunistic and suggested that Wu wants to use the mayor’s office as a stepping stone to higher office.

A Boston resident, Nassour unsuccessfully ran for city council in 2019. She called herself a “social progressive and fiscal conservative” on her campaign web site.

“I’m pro-choice, pro-women, I am committed to equality and fight passionately for the causes I believe in,” Nassour wrote.

Although Nassour supports Campbell in this race, she regularly donates to Republicans. In 2020, she gave $500 to each of the following candidates:  then-state representative William Crocker (R-Barnstable); state Representative Sheila Harrington (R-Groton); state representative candidates Summer Schmaling of Halifax, Tatyana Semyrog of Duxbury, and Susan Smiley of Lancaster; and then-Norfolk County sheriff Jerry McDermott. She also gave $1,000 to Stephanie Fattman, now the Register of Probate for Worcester County (and the wife of state Senator Ryan Fattman (R-Sutton), according to the state Office of Campaign and Political Expenditure.

The preliminary election for the 2021 Boston mayoral race is set for Tuesday, September 14.