Officials are served in funding lawsuit that alleges violation of education, civil rights 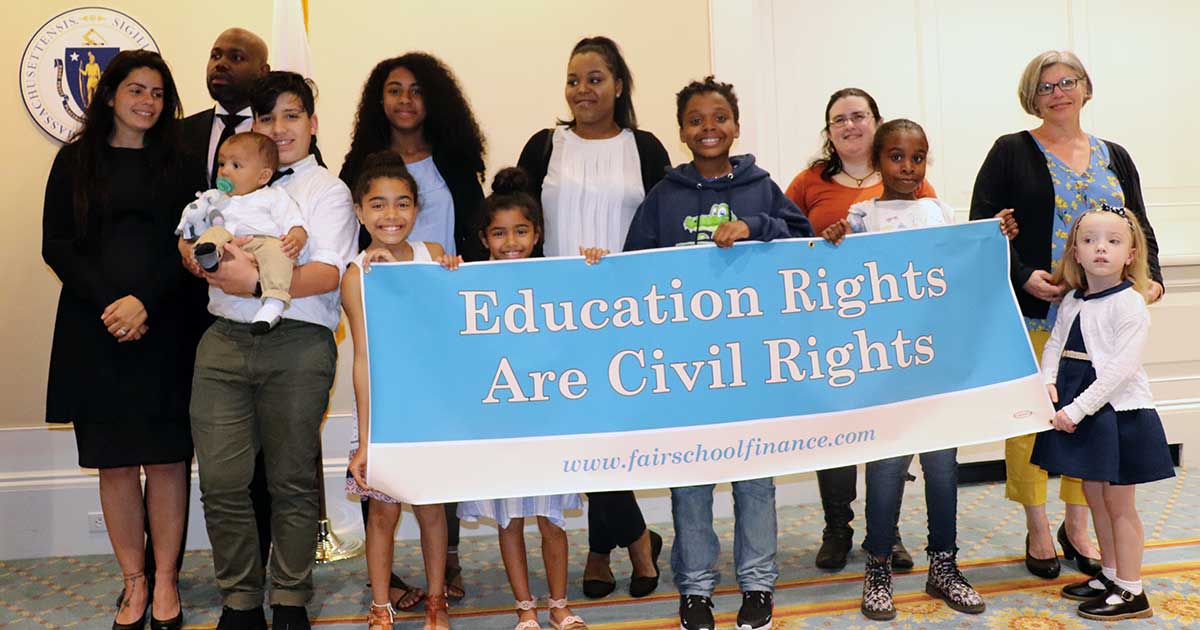 Parents and their children are among the plaintiffs in a lawsuit seeking an end to the chronic underfunding of urban, rural and suburban public school districts.

As students all over Massachusetts begin yet another school year in underfunded schools, state education officials and the state Board of Elementary and Secondary Education have been served with a complaint and summons in a lawsuit alleging constitutional violations of students’ education and civil rights as a result of the state’s inadequate school funding system.

“This month, students in low-income urban and rural communities across the state are returning to schools that have been deeply underfunded for these students’ entire lives,” said Maureen Colgan Posner, a Springfield teacher and member of the Council for Fair School Finance, which is backing the lawsuit. “As legislators return to work with public education funding still on their to-do list,” we cannot wait any longer to see if they will fix the racial, economic and geographic disparities that continue to harm the students that my colleagues and I teach.”

The MTA is a leading member of the Council for Fair School Finance.

More than a dozen children and their parents from Chelsea, Chicopee, Fall River, Haverhill, Lowell, Orange, and Springfield, as well as the New England Area Conference of the NAACP and the Chelsea Collaborative, whose members include parents and students in those seven underfunded school districts, filed the lawsuit — Mussotte v. Peyser — in Massachusetts Supreme Judicial Court in June. The lawsuit accuses the defendants of ignoring the constitutional mandate requiring the Commonwealth to fund a quality education for all students.

“My children started second, fifth, and seventh grade last week and in my eight years as a parent in the school system, they’ve never experienced fully funded schools,” said Denise DaPonte Mussotte, the mother of three Fall River students who are plaintiffs in the case and another who attends vocational school. “How can children concentrate on learning when they are in a class with more than 30 students, when their books are outdated, when their school buildings are crumbling, when there aren’t enough guidance counselors, librarians, or after-school programs?”

“Four years after the Foundation Budget Review Commission revealed the deep underfunding of our public school system, the state’s failure to correct that injustice continues,” said Juan Cofield, President of the New England Area Conference of the NAACP, a plaintiff in the case. “Another school year has begun, and children of color and students from low-income families all across Massachusetts are still being denied their constitutionally guaranteed right to a quality education. We are not just asking for action. We are demanding justice for Massachusetts students, and we are demanding solutions that reflect what the Constitution requires of the Commonwealth.”

The lawsuit was developed by the Council for Fair School Finance, which has a history of advancing the cause of education through the courts. Over a quarter-century ago, in a landmark case brought by the CFSF, the court held on June 15, 1993, in McDuffy v. Secretary of the Executive Office of Education, that the Commonwealth of Massachusetts has a duty under the Massachusetts Constitution to provide students with a high-quality education.

"We are demanding justice for Massachusetts students, and we are demanding solutions that reflect what the Constitution requires of the Commonwealth.”

“By serving the defendants with this lawsuit, we move one step closer to achieving justice for thousands of students who have been deprived of their constitutional right to a high-quality education no matter where they live, their family income, the color of their skin, the language they speak at home or the services they need to succeed,” said Iván Espinoza-Madrigal, Executive Director of Lawyers for Civil Rights, a member of the Council for Fair School Finance.

When the lawsuit was filed in June, several parents spoke about the impact of state underfunding on their children’s schools. In Fall River, a single English learner specialist is often responsible for the language needs of 75 students, while students themselves often serve as translators for parent-teacher meetings because the district cannot recruit, retain, or afford enough bilingual professionals to meet a growing ELL population. In Chicopee, after-school programs and 37 staff positions were eliminated last year, while many school buildings are over 50 years old and books that are over 30 years old are still used in class. In Chelsea, inadequate state funding means many classrooms have over 30 students, even at the elementary level.

“Chelsea is one of the poorest communities in Massachusetts and it sits within a stone’s throw of Massachusetts’ capital city,” said Mayra Balderas, a parent from Chelsea whose son is a plaintiff in the case. “For years, the state has ignored the education needs of children here, including my 10-year-old.”

The nearly 100-page complaint documents in painstaking detail the disturbing facts about the failures of our public education funding system. It cites the bipartisan Foundation Budget Review Commission report, issued in 2015, which conclusively found that significant additional funding was needed in four key areas: services for low-income students, students with disabilities, students who are English learners, and employee and retiree health insurance.

“My son has a learning disability. Fall River can't afford to give him and other students the special help they need,” said Maneisha Straker, the mother of two Fall River students who are plaintiffs in the case. “It's not fair to my son, but it's also not fair to his classmates when their teacher doesn't have another trained adult in the classroom providing that extra help.”

In Lowell, where over 70 percent of the school district’s enrollment is made up of students of color, the district does not employ a single DESE-licensed librarian. In Springfield, where more than 75 percent of the students are considered economically disadvantaged, inadequate state funding has forced “a steady diet of budget cuts year after year.” Haverhill, where more than 45 percent of students are considered economically disadvantaged, employs only one guidance counselor for every 503 students, and no social workers.

The rural community of Orange in Franklin County has the ninth-lowest median income in the state. Only 16.9 percent of its residents have attained a bachelor’s degree or higher, and 55 percent of its students are considered economically disadvantaged. This year, Orange could not afford to fully staff its elementary schools and it eliminated entire classes, which increased class sizes across all of its schools. Classroom computers have not been updated since the 1990s, and the district cannot replace textbooks that are decades old and falling apart at the seams.

“Without more state education aid, students in Orange will simply fall further and further behind,” said Danielle Andersen, the mother of two Orange students who are plaintiffs in the case. “The condition of their school buildings and learning materials is deplorable. It sends them the message that we expect them to fail.”

The Council for Fair School Finance is a nonprofit coalition of stakeholders in preK-12 education that includes the following members: American Federation of Teachers Massachusetts, the Boston Teachers Union, Citizens for Public Schools, Lawyers for Civil Rights, the Massachusetts Association of School Committees, the Massachusetts PTA, the MTA and the New England Area Conference of the NAACP.